Twenty Fourth Question of the Day.

(Supergirl slightly scared, in the Slaughter Swamp, by Craig Hamilton, from Upper Deck’s Vs. System)

What are you most afraid of?

Happy Halloween, to one and all.

Here’s hoping your high holiday is as terrifying and tremendous as ours promises to be.  I am staying home from work and going to sit in the dentist’s chair.  Scream!  Then tonight I am dressing as the sky and Nina as the Earth, as we trick or treat with thousands attending the Florida Panthers vs. Carolina Hurricanes NHL hockey game… followed by stops at three different house parties.  It is my favorite day of the year, since it gives people an excuse to express latent urges that are usually kept in check.  Have a great one, one and all.

As long as you are here, you might as well laugh.

I found this list randomly and chopped it in half.  It seems to have been all over the internet, like a metaphoric slut who finally got around to me.  I met her here: http://iwim.wordpress.com/humor-medicine/

1. Her face was a perfect oval, like a circle that had its two sides gently compressed by a Thigh Master.

2. His thoughts tumbled in his head, making and breaking alliances like underpants in a dryer without Cling Free.

4. She grew on him like she was a colony of E. coli, and he was room-temperature Canadian beef.

5. She had a deep, throaty, genuine laugh, like that sound a dog makes just before it throws up.

8. The little boat gently drifted across the pond exactly the way a bowling ball wouldn’t.

10. John and Mary had never met. They were like two hummingbirds who had also never met.

12. The young fighter had a hungry look, the kind you get from not eating for a while.

13. He was as lame as a duck. Not the metaphorical lame duck, either, but a real duck that was actually lame, maybe from stepping on a land mine or something.

(UPDATE: The treasures have been found, especially the load of mad fun we had.  I will start another one soon.)

Here is the text you are looking for, good luck:

1. Rian Fike is a performance artist. This is one of the most fascinating and satisfying mediums that he has ever mastered. An artist rarely has such a rabid captive audience. The feedback is immediate and passionate. The potential for personal creative power and manipulation of other humans is addictive and nearly unparalleled in the other environments that Rian has chosen to practice his craft. The gallery/performance space that VsRealms provides has allowed him to create a persona that cannot be denied as a thought-provoking, entertaining, and enjoyable addition to hundreds of lives across the globe. Especially his own.

2. This game makes my childhood fantasies come true. I am a nerd. I adore collecting trading cards. I get a special tickle in my throat when I think about superheroes and supervillains. I get tremendous physical pleasure from artistic renditions of my favorite characters. Good paintings of bad girls turn me on. Getting to explore a whole handful of females in spandex that I had never heard of every three months? It doesn’t get any better than that.

3. The Vs. System community is real. We are real people participating in real-time interactions with real cards on real tables in real cities. I have hundreds of real friends that I would have never had without this game. My wife and I are urban hermits. Vs. System got me out of the cave.

4. My day job could be boring. Personally, I am never bored. Never have been, never will be. I used to paint and draw and sculpt and play multi-player Magic the Gathering along with my students. Then Vs. System came along. Then I discovered Vs. Realms. Two and a half years later, this is still my favorite way to kill time on the job.

5. Working for UDE every Monday on Metagame is simply the ultimate second job. Keeping my fingers all over the forums helps me follow the currents of the game as it ebbs and flows and branches into new territory that trading card games have never seen before. The response to my articles has been phenomenal, and it ices my cake weekly. I would be half the writer I am without all the gabbing we do here on the boards. You are a big part of my success, and I love sharing the spotlight with as many of you as I can.

So thanks again. For the roast, the eulogy, and the continued attempts to kill stubarnes with flaming hate. Each year gets better, and this last one was the best of my entire life.

Life is a party, and then we leave our mark. 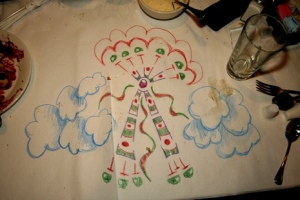 (party pics from this weekend’s festivities at: flickr.com/photos/sylvar/page3)

So my dad turned seventy, and we had the first surprise party that I can remember.  It was a blast.  Nina painted a 1937 Ford on a shirt.  I got him some Hot Wheels for his collection.  We had the whole family together again, and we got to draw on the tables at the restaurant.  Good times.

I always wonder if our lives are single paintings in the grand scheme of things.  Like we splatter ourselves on the canvas of eternity and leave some kind of funky inkblot when we are done.  And then I wonder what mine would look like, and how it would be possible to expand my consciousness until I am able to view full lifetime images like that.  If I figure it out, I’ll let you know.

Twenty Third Question of the Day.

What gives you the most comfort when you need to let go of everything and relax?

I can tell you that I got that image from hellboymovie.com, I can tell you I linked there from Miguel’s blog, but I cannot tell you why I am posting it today.  Some secrets must be kept.

Of course you could speculate in the comment section, and I could (up to a point) tell you how close your guesses are to the truth, but that’s up to you.