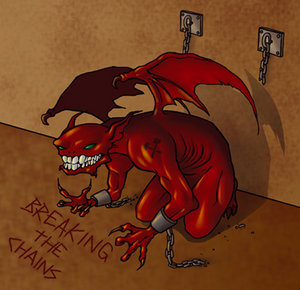 (the monkey on the back from http://rooler.deviantart.com/)

Life flows.  In other words, nothing is really constant.  We cling to things that give us certain sense of stability and security, but they too shall pass.  This morning I am in a mood to just float downstream.

Thirty Fifth Question of the Day.

What are your impressions of the Giant Size set so far?

The Fattest Turkey I Ever Saw.

(scruffy getting pwnd from http://dunlavey.deviantart.com/)

Giant Size Thanksgiving Party?  Yes please.  You are going to have to wait for the article on vssystem.com but I can tell you it was amazing.  What a fun way to play our beloved game.   Yum.

Filed under Vs. System

Thirty Fourth Question of the Day. 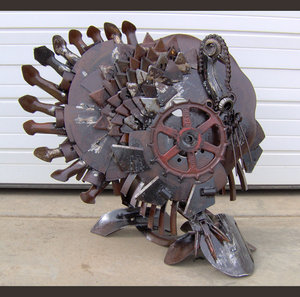 Today is a good day.  The day before a holiday, the whole school smiling with growling stomachs for the feast.  What a relief, to make it this far into the year so quickly.

What is your take on Thanksgiving?

That was my one-man show at the New Gallery of the University of Miami, in 2001, when I was 40.  It was the only time I really focused on a body of work and refined my wobble up to that level.  The internet attention performance art that I have been doing in the meantime is much more immediate.  Paintings take time and a seriously concerted effort, while blogging and message boards are much more click-and-get.

Either way, there is now a certain amount of human awareness energy connected to my stuff.  When I was fooling around with quantum mechanics with my buddy Nick Herbert, we talked about a fascinating idea for an experiment: Take two identical artworks.  Infuse one of them with an excess of attention; get a lot of people to look at it a long time.  Then display both the “pre-seen” piece and the “unseen” piece, while measuring the “popularity” of the two by recording the amount of time the visitors spend looking at each one.  The hypothesis predicts a longer attention total for the piece that was “pre-seen”.

We never devised the specifics thoroughly enough to test it.  Any suggestions?

Filed under Art I live with., Rambles

Thirty Third Question of the Day.

What are your most impressive skills, and what skills do you wish you could possess?

So many triumphs, so little time.  I have reached the mountaintop quite often.  The glory days of the post-punk late eighties contained some of my greatest successes, and they are one of the things I still revel in.  Last night there was a Nirvana Unplugged marathon on TV, and it brought back a flood of championship memories.

We would paint shirts, and then bring them to the show to break the ice.  Our heroes (Minutemen/fIREHOSE, Meat Puppets, Sonic Youth, Butthole Surfers, Husker Du) would always be hanging around somewhere, usually in a van outside the club.  We would find them, grab them, and tell them how they must wear the shirts onstage for the show.  It worked every time.

That photograph is from one of the highlights.  Curt Kirkwood, wailing.  One night in Tampa I was chilling after the show and two bimbo/blondes came giggling into the room.  They gushed about how great the band was, then passed around a jacket for them to autograph.  The girl gave the pen to me first, even though she had just seen the show and should have known that I was not in the band.  I signed it while the Puppets laughed under their breath.  I told the girls, who wanted to get to know the music better, to get the album called Meat Puppets II.  Curt disagreed, telling them to buy the newer stuff.

A few years passed, and then Nirvana invited the Meat Puppets to play on the Unplugged show, and confirmed my tastes.  Kurt Cobain agreed with me, chosing three songs from the record that I knew was their best.

Then a couple years ago, Meat Puppets II was re-issued by Rykodisc.  Derrick Bostrom the drummer did the design on the new package.  One of our painted shirts was featured in the photograph under the CD.  It is one of the crowning achievements that carry me on toward even greater things, especially when Kurt Cobain sings “Lake of Fire” on national television.