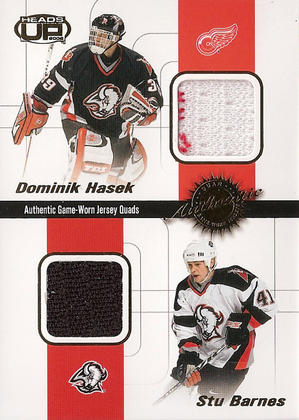 That card made so many dreams come true for me.  My two all time favorite players, together, with a piece of their game used jerseys, with a repair stitch on the Hasek?  Beyond perfect.

And now it begins.  The 2008 Stanley Cup Playoffs.  The best two months in sports, with the greatest trophy on Earth at the end.  These would be my druthers, in order, which means they probably won’t happen.

1. Stu finally gets his name etched on the Cup.  Dallas is good enough, but they will need a whole lotta luck.  Especially starting off against the Ducks.  Ouch.

2. The Dominator comes big, for his second ring.  Red Wings fly back to the top of the heap.  Hasek cements his legend.

3. The Big O in Washington lights the hockey world on fire, and makes a miracle run with a team that hasn’t seen the postseason in years.  The Crystal Wall has the Habs looking silly for trading him.

4.  Those Habs bring the Cup back home with a vengeance.  Montreal is one of the funkiest cities on the planet, and when it comes to this sport… no one does the voo doo like they do.

5. A Wild party breaks out.  Minnesota has a champion.  With bright red and green jerseys.  Yikes.

7. Calgary makes it a Canadian Cup after all these years.  Three chances for the land that invented the game, it’s about time.

8.  Ottawa finally grows a pair for the win.   Not gonna happen, but I do love me some Spezza.

9. Tennessee proves that country music and good hockey belong in the same city.

13.  I come to my senses and explain why we switched sports for a second.  I won’t be rooting for any of the seven teams that I did not mention.  Which means one of them will surely win it all.   Happy Thursday Thirteen everyone, see you at the rink!