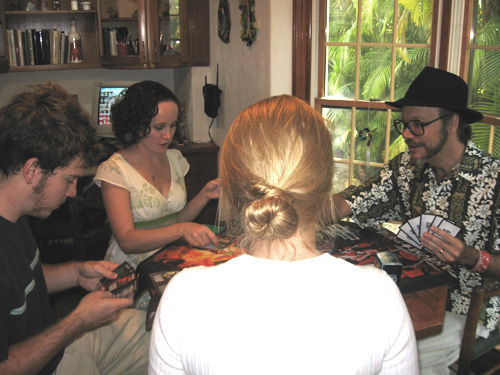 That was last year’s Vs. System Thanksgiving feast, live on the mothership. I was playing as the newly released Galactus, and my three wonderful children were running hordes of one-drop army dudes to swarm their father into submission. You can click that link to see the decklists and the final results. For the Feast of 2008, we have a fresh recipe from the other side of the Atlantic.

The center photograph is the actual gamestate that Joe “lordoflimbo” Clarke found himself in on turn six the other night in Britain. How in the world could so much stuffing come out of a single 60-card deck?

Before we start, you will need to know where to find the mythical Currs to stuff your bird. This is from the official Marvel Comics’ continuity book: 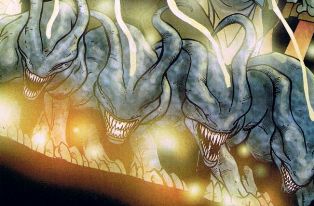 Distinguishing Features
They use sensory like tentacles to find their way through the cosmos. They are only found in packs of threes and are attached to each other by a glowing umbilical cord. 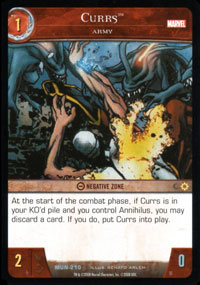 That’s the meat of the deck, allowing the Thanos Turkey to spill its juicy bounty all over the board. Here is the actual recipe, by the Jankmaster Chef Joe Clarke himself. I hope you are hungry.

Really really special indeed, just in time for Thanksgiving. I have always adored Thanos. Especially as the boss in the original Marvel Super Heroes game on Playstation One with Thanos chicks and everything.
Which brings us to the sauce.
………… 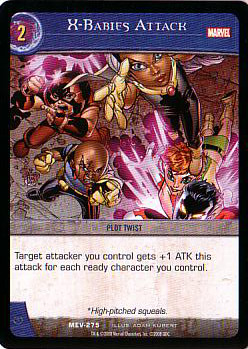 …………
My friends, that is the flavor. It is the last card in the new Marvel Evolution set, which for all we know will be the last Vs. System set ever printed. It tickles my soul. See, if you click back over to last Thanksgiving, you will remember my mutant mashed potatoes that eventually evolved into the deck named “X-babies”. It was the first recipe that I created completely from scratch, and it made me the Marquee Champion of Miami before it went on to worldwide fame and fortune. Here, on Thanksgiving day, I would like to give thanks to Ben Seck and Billy Zonos for naming the final card in the MEV set in my honor. Not only will it fit perfectly inside every Vs. System dish I have ever cooked, but it stuffs me full of delicious bliss. Happy Thanksgiving, to one and all.
…………

Filed under Vs. System