I don’t know about you, but in our house The Big Bang Theory is considered the greatest sitcom of all time. Today there was a rather intense secret revealed that goes a long way in expaining the magical charm of the show.

Penny and Leonard had a two-year affair in real life, and they were madly in love.

Kaley Cuoco finally told the world about her relationship with Johnny Galecki in CBS Watch Magazine. Perhaps the most incredible aspect of their love? It was kept utterly secret for two whole years. They never went out in public. They hid their amor from the other actors on the set. They boiled, they burned, they bubbled with the most explosive feelings two humans can experience… and no one else knew.

For the past few weeks we have been showcasing some of the outrageous Marvel Comics art from the sketch card community chest. Today we are getting alphabetical.

To think that these orignal art masterpieces are one-of-a-kind prizes that have been inserted in a single set? Wow.

It is true. This entire catalog of visual bliss is contained within the Rittenhouse Archives Marvel 70th Anniversary collection. Happy hunting!

That is the prize possession of my card collection. George “Geo” Davis created it as a commission and it was approved by Marvel Comics as an official entry into the magnificent mythos of Squirrel Girl.  She is quickly becoming much more than just a cult hero on the interwebs. 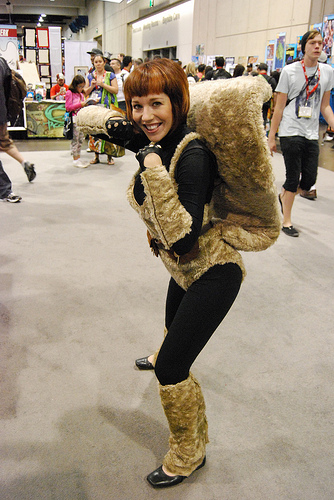 Yes, she was cosplayed at the San Diego Comic Con. 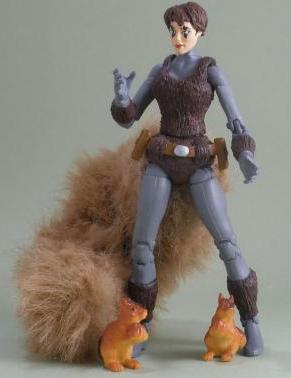 No, you cannot buy an official action figure yet. That does not, however, stop fans from making the dream a reality.

That is Peter Parker with his new girlfriend Chat. She appears in the Spider-Man Marvel Adventures comic book series and she talks to animals of all types, including a bunch of furry little tree rodents. She has a mystery sister that will be revealed in issue #8, and Squirrel Girl was mentioned by name in the Marvel Adventures Universe just this week. Stay tuned, it looks like the webhead will soon be seen with Doreen Green.

The Chibi crew can claim the most meaty and serious layer of the Squirrel Girl snowball, since Super Hero Squad featured a rumored romance between War Machine and our nutty hero on an actual television show. Add the fact that the designers of the Super Hero Squad Online video game have promised to include Squirrel Girl in the line-up, and you have bouncing baby bliss of the biggest kind.

We will leave you today with that most beautiful portrait, by the incomparable Emily. Squirrel Girl’s fame is growing as she rolls deeper and deeper into the pop history books of official Marvel Comics canon. Jump on quick, this is going to be nuts.

Today we have some recent sketch cards by the master. Remember, these miniature masterpieces are only two and a half by three and a half inches. And, as a special added bonus, we get to party before and after the coloring. 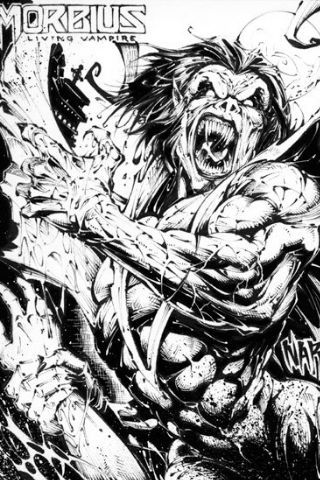 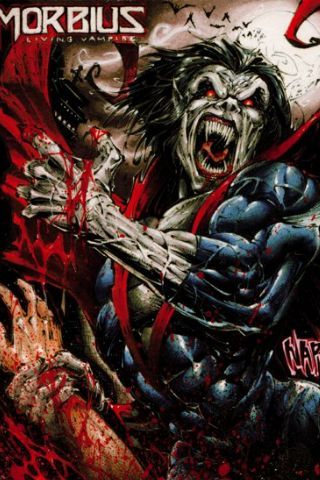 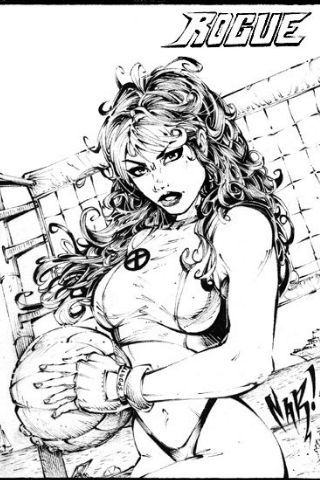 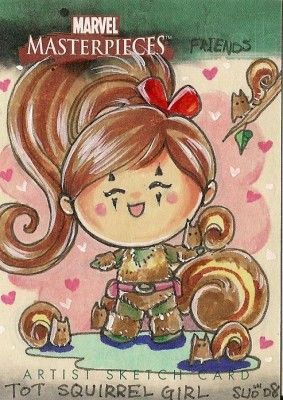 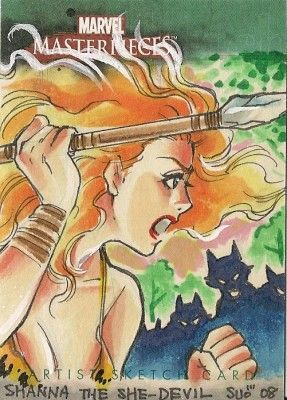 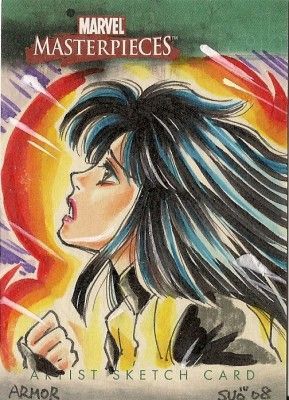 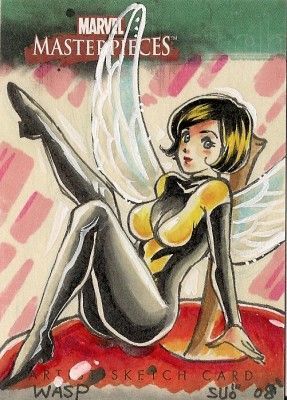 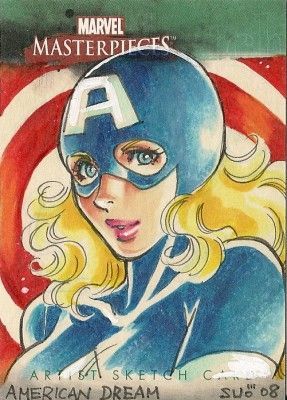 The artist is Sanna U. The first card is Squirrel Girl. My mind is freed from its moorings. This is bliss.

Tagged as Sanna U, Squirrel Girl

Certain artists are able to capture sublime states of being with their unique line. Randy Green is one of those.

This series of original art sketch cards seems to tell a story that cannot be expressed in words. Truly transcendent. 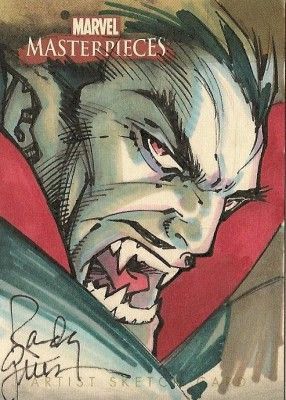 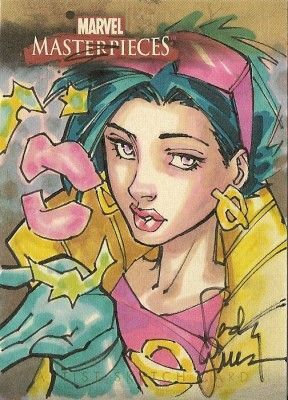 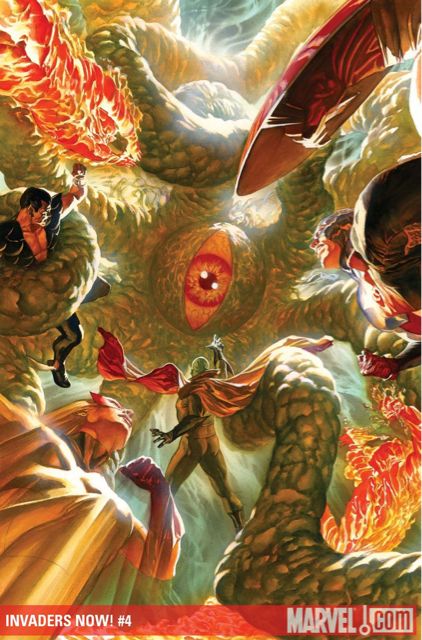 You know the Neopolitan ice cream with three common flavors in one package? This is a lot more intense. Coming in December, Marvel Comics is bringing Shuma-Gorath back. Alex Ross himself painted the tentacles on the cover. Word.

Not your taste? Okay, let’s shift gears extremely. Dig in to Ivan Brunetti’s masterpiece on Strange Tales. I love this. 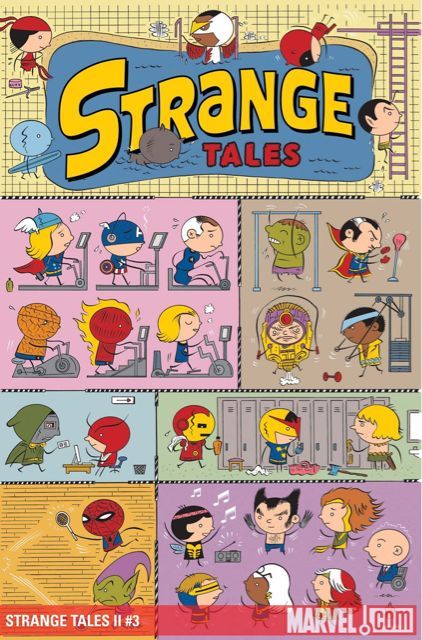 If those were chocolate and vanilla, we need some serious strawberry to finish the mix. Lotsa red here. Rob Liefeld, returning to splatter his creation properly. I hope you brought your spoon! 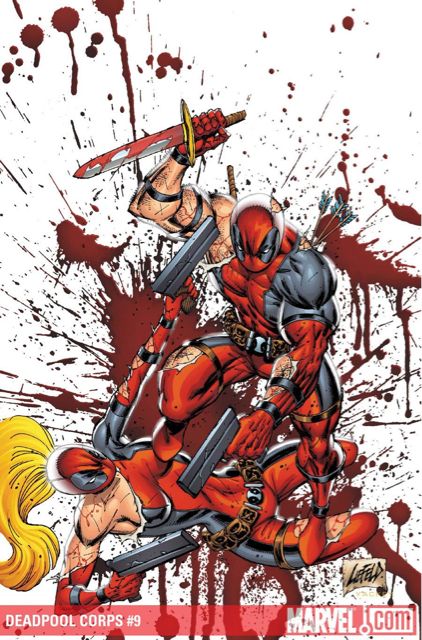 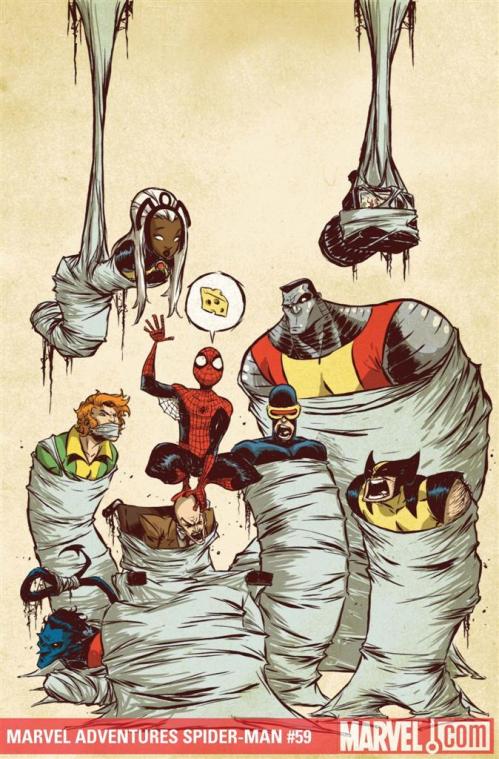 Marvel Adventures of Spider-Man is widely recognized as the best Spidey title in the world at this moment in time. For one thing, it allowed the madness of Skottie Young to whip out that wicked cool cover for #59. Here is the original drawing.

Aside from the intensity of the art and the quality of the storytelling, this book has introduced a sweet new character into the mythology of the Marvel Universe. Her name is Sophia Sanduval, and she is better known as Chat.

As you can see, Chat talks to animals. She is constantly surrounded by a flock of feathers and fur. This delicious dolittle also dropped an intriguing hint recently that may open the zoological possiblity of a Squirrel Girl appearance in Marvel Adventures of Spider-Man. 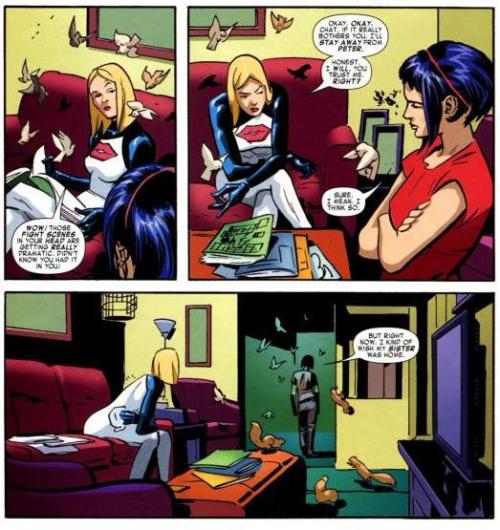 Chat’s sister is three issues away. Will she be revealed as Doreen Green? Will Squirrel Girl finally have a featured role in a major ongoing series? A little bird told me maybe, but only time will tell. 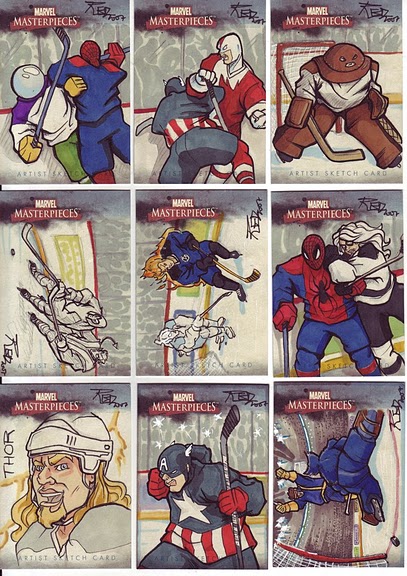 (You can find more sketch cards in the Saloon: http://sketchcardsaloon.wordpress.com/ )

That is not an illusion. Kate “Red” Bradley actually created a series of one-of-a-kind original art sketch cards that featured Marvel characters playing hockey in their signature colors. The cards were approved by Marvel and inserted into Upper Deck’s Marvel Masterpieces packs. They now fetch prices in the neighborhood of $200 – $300… IF you can ever find one available for sale.

Filed under Art I live with., Marvel Masterpieces

His work speaks for itself, and it is one of the loudest visual screams in the world. He has a website under construction but so far it does not contain a gallery:

Therefore and forthwith we give you a mind-blowing pile of the Marvel Masterpieces of Nar. Your eyes will never be the same.

Big News About Marvel vs. Capcom 3. 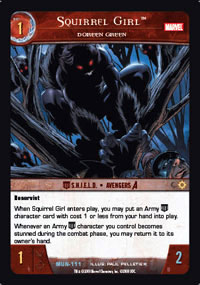 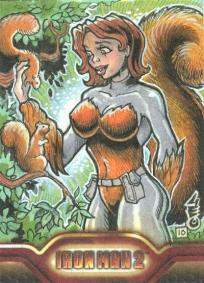 As always, I am using trading cards to illustrate my bliss. Today the joy is spinning like a Playstation disc inside my brain. We are a bit closer to the confirmation of Squirrel Girl in Marvel vs. Capcom 3, and rumor has Mysterio swimming into the line-up alongside her.

There is a “leaked list” of the characters that will be included in the game. If this were accurate, all our dreams would come true simultaneously. Here is the Marvel roster that has been mentioned:

Like all things that seem too good, this one began to taste bad right away. As soon as we started to celebrate, our hopes were slightly dashed. In Tokyo this morning, Capcom revealed two intense official truths. First, we will be fighting with X-23 as a playable character. Second, there will be a simple mode for noobish button smashers everywhere.

The sigh of relief we felt in knowing that the special moves will be easy to bust was instantly tempered by the fact that X-23 is not on the “leaked list”. Does that mean Squirrel Girl and Mysterio are out? Of course not. It could still be possible. The waiting continues, but at least we have leather jeans and female claws to groove on while we wait. 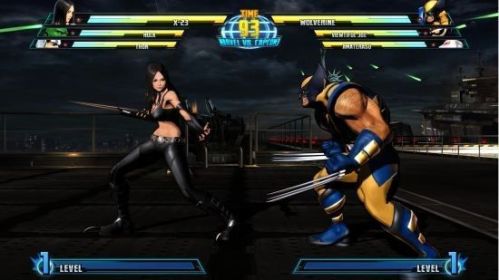 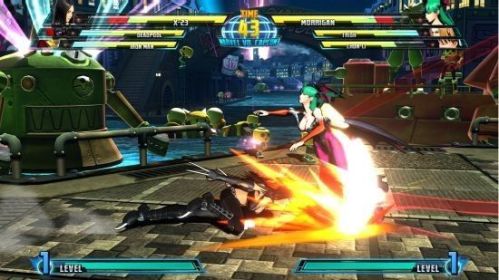 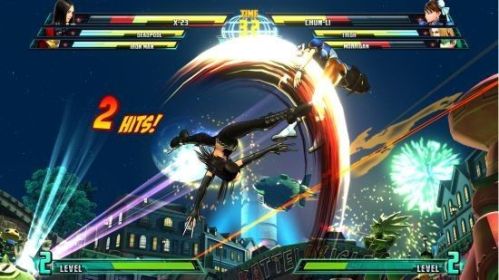 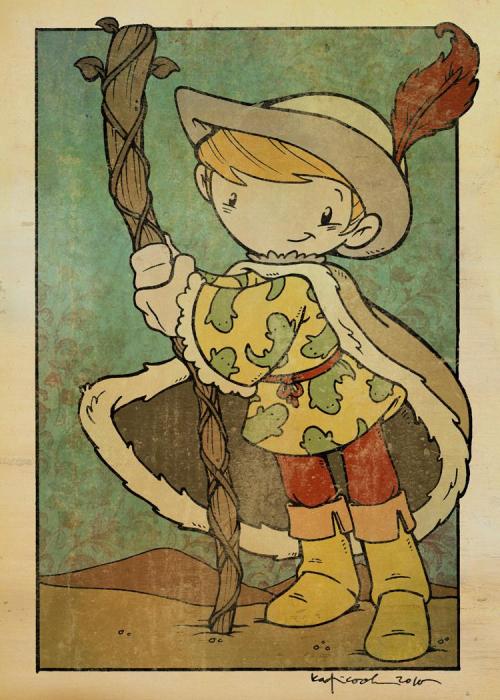 That is a truly amazing new Tarot card created by the magnificent Katie Cook. It will be part of the Superpunch deck. In case you don’t know, Superpunch is one of the coolest spots on Earth. Check it out at your earliest convenience.

Katie has made a major name for herself drawing the sweetest Chibi superheroes ever inked. Today we will showcase a whole slew of mutants that have never looked better in their mythological little lives. Starting with Squirrel Girl, of course.

Those are original art sketchcards. That particular medium allows a great deal of artistic license, such as Doreen Green seen as part of the X-Men team. We will finish with some of the more traditional members, I hope your eyes can handle this much joy.