Thursday Thirteen: Perfect For Each Other.

(Bottle of Love and Box of Heart, both created by my beautiful wife.)

Nina and I are perfect for each other. It has always been the main goal of our lives, and we have actually accomplished it. Let me count the ways.

1. We both believe that love is a spiritually supernovic ritual for absolute transformation and metaeuphoric magick.

2. We have a common purpose for our rituals: Local Epiphany and Global Bliss.

3. We are both really nice people who can’t stand being mean in any form.

4. We like the same foods and enjoy them deeply.

5. We talk about anything and everything and we keep talking until we have reached common ground, even if we eventually disagree.

6. We laugh with our entire beings together. We do it every single day.

7. We share creative projects, whether co-writing a novel, adding advice and direction to each other’s individual work, or building a custom canopy for our bed.

8. We sincerely appreciate each other, exactly as we are.

9. We never, ever, dwell on the negative.

10. We have the same taste in music and movies and we obsess over both.

11. We comfort each other, no matter what.

12. We reflect on our blessings constantly, taking the lovebird’s eye view to our life as often as we can.

Happy Valentine’s Thursday Thirteen, Earth Angels. May your life be filled with love. 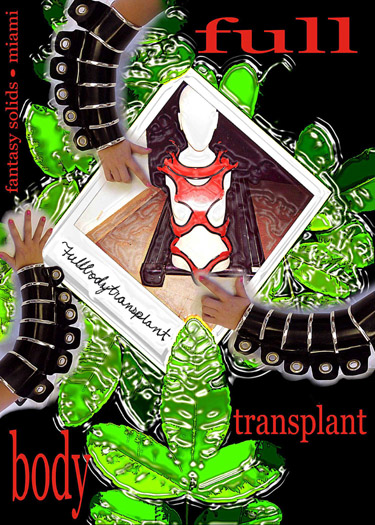 The full body transplant experience grows from the urge to become the object of your desire, to merge completely into one glowing entity, to be totally in love. Not love like hearts and possessions, but love like fire.

Nina and I met under a full moon on Miami Beach at midnight, and we recognized each other from twelve previous lifetimes together. (I wrote a short story about the other lifetimes, but I forgot where I put it.) We were each accomplished Chaos Magicians, and we were both filled with the most insanely intense desire for each other.

We knew this was the one, so we waited. We waited one entire year before our first kiss. Magick often involves sacrifice, and the power we were building was focused on one of its most exalted rituals. We were going to switch bodies.

I am not one to switch and tell, but I can share some of the side effects. We began to release the exact same pheromones. We could talk without words. Sometimes our faces disappeared when we looked into each other’s eyes.

We have never sought a scientific explanation for the experience, but one day I was pixeling around with Photoshop for the next wave, I hooked up with Nick Herbert and his Quantum Tantra trip. Nick is the real deal. His experiments with the accelerators at Stanford have combined with the confirmed existence of the quantum dimensions of other realities, enough to hear an echo of the full body transplant experience in deep physics. Yes, it is very possible that the human mind is a form of consciousness that can “switch bodies” with any other physical structure, including inanimate objects. If the thing you are joining with is on the other side of the Universe, all your transportation problems are solved.

This quantum effect creates very very dangerous possibilities, but it also solves all problems associated with ethics, and Nick Herbert calls it the Golden Rule 2.0. When he was nominated for the Nobel Peace Prize in response, he actually used some of my illustrations in his presentation. You can click over to his site for more information…

Here’s your link, merge at your own risk:

I know it is possible to switch bodies with someone or something else, I’ve done it.  I can’t give you detailed instructions, but the first step is the courage to give yourself permission.

Filed under Art I live with., Full Body Transplanting, Rambles