That’s me in the corner.  Sharing the spotlight with some wonderful kids from our community that really needed a good Christmas.  Thanks to Chris and Adrienne Bosh, along with Burger King and Team Tomorrow, we made dreams come true.  Happy Holidays to one and all. 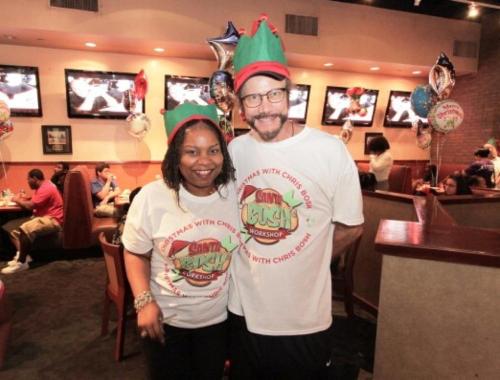 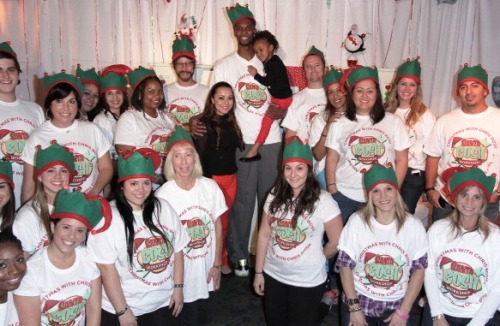 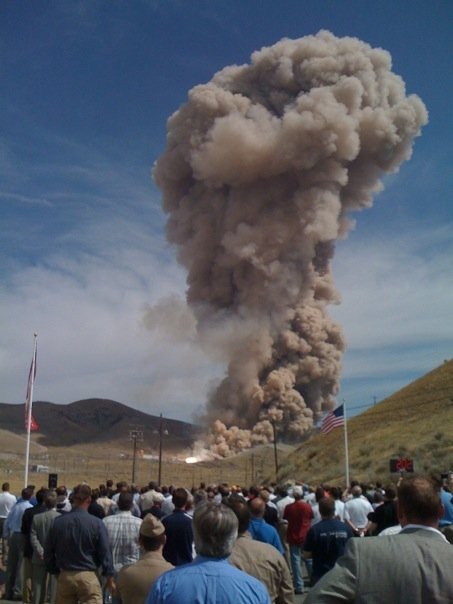 In a few years, the Ares rocket will be carrying people into space. Today, in the Utah desert, it carried a whole bunch of dirt into the air. 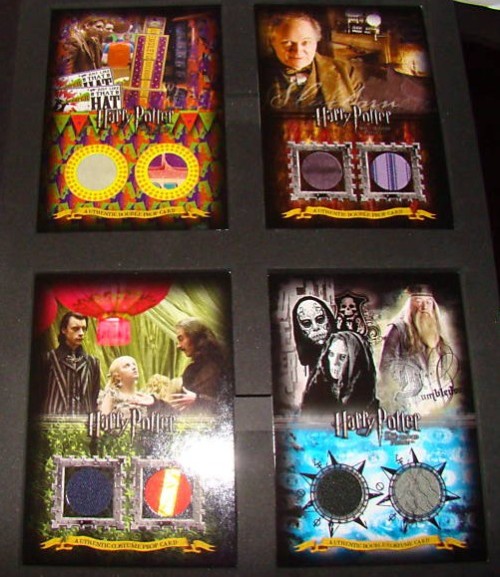 If you have never seen cards like this, you are in for a treat. They each contain actual pieces of material from costumes and props that were used in Harry Potter and the Half-Blood Prince. These particular cards are tough to acquire, since they are only available by getting lucky in the goodie bags at the Artbox booth at San Diego Comic-Con 2009. Here is the full set:

You may already know. Here at Full Body Transplant we have a thing for the tentacles. Now life imitates art. From Huffington Post, somebody call Hellboy!

The carnivorous calamari, which can grow up to 100 pounds, came up from the depths last week and swarms of them roughed up unsuspecting divers. Some divers report tentacles enveloping their masks and yanking at their cameras and gear.

Stories of too-close encounters with the alien-like cephalopods have chased many veteran divers out of the water and created a whirlwind of excitement among the rest, who are torn between their personal safety and the once-in-a-lifetime chance to swim with the deep-sea giants.

The so-called Humboldt squid are native to the deep waters off Mexico, where they have been known to attack humans and are nicknamed “red devils” for their rust-red coloring and mean streak. Those who dive with them there chum the water with bait and sometimes get in a metal cage or wear chain mail to avoid being lashed by tentacles.

The squid hunt in schools of up to 1,200, can swim up to 15 mph and can skim over the water to escape predators.

“I wouldn’t go into the water with them for the same reason I wouldn’t walk into a pride of lions on the Serengeti,” said Mike Bear, a local diver. “For all I know, I’m missing the experience of a lifetime.”

The squid are too deep to bother swimmers and surfers, but many longtime divers say they are staying out of the surf until the sea creatures clear out. Yet other divers, including Shanda Magill, couldn’t resist the chance to see the squid up close.

On a recent night, Magill watched in awe as a dozen squid with doleful, expressive eyes circled her group, tapping and patting the divers and gently bumping them before dashing away.

One especially large squid suspended itself motionless in the water about three feet away and peered at her closely, its eyes rolling, before it vanished into the black. A shimmering incandescence rippled along its body, almost as if it were communicating through its skin.

But the next night, things were different: A large squid surprised Magill by hitting her from behind and grabbing at her with its arms, pulling her sideways in the water. The powerful creature ripped her buoyancy hose away from her chest and knocked away her light.

When Magill recovered, she didn’t know which direction was up and at first couldn’t find the hose to help her stay afloat as she surfaced. The squid was gone. 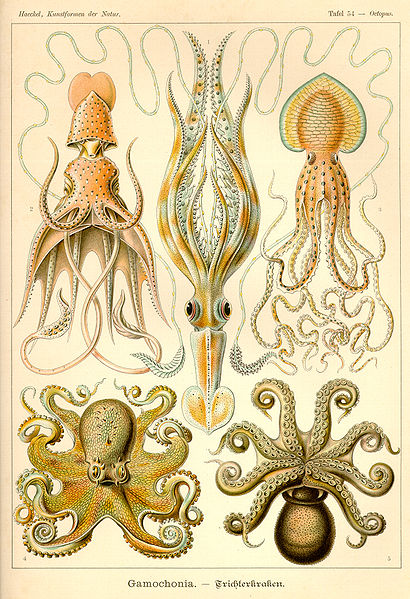 “I just kicked like crazy. The first thing you think of is, ‘Oh my gosh, I don’t know if I’m going to survive this. If that squid wanted to hurt me, it would have,” she said.

Other divers have reported squid pulling at their masks and gear and roughing them up.

Roger Uzun, a veteran scuba diver and amateur underwater videographer, swam with a swarm of the creatures for about 20 minutes and said they appeared more curious than aggressive. The animals taste with their tentacles, he said, and seemed to be touching him and his wet suit to determine if he was edible.

“As soon as we went underwater and turned on the video lights, there they were. They would ram into you, they kept hitting the back of my head,” he said.

“One got ahold of the video light head and yanked on it for two or three seconds and he was actually trying to take the video light with him,” said Uzun, who later posted a 3-minute video with his underwater footage on YouTube. “It almost knocked the video camera out of my hands.”

Scientists aren’t sure why the squid, which generally live in deep, tropical waters off Mexico and Central America, are showing up off the Southern California coast — but they are concerned.

In recent years, small numbers have been spotted from California to Sitka, Alaska and are increasingly being spotted off the San Diego coastline — an alarming trend that scientists believe could be caused by anything from global warming to a shortage of food or a decline in the squid’s natural predators.

Their presence off the coast — and the subsequent die-offs — may occur when their prey moves to shallow waters and the squid follow, and then get trapped and confused in the surf, said Hillgarth, who saw a dying squid on the beach last weekend.

“It was an amazing privilege to touch a creature like that and see how amazingly beautiful it was,” she said. “They have these wonderful eyes. … They look all-seeing, all-knowing.” 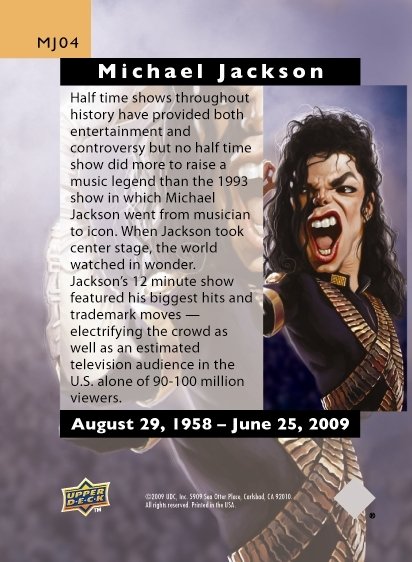 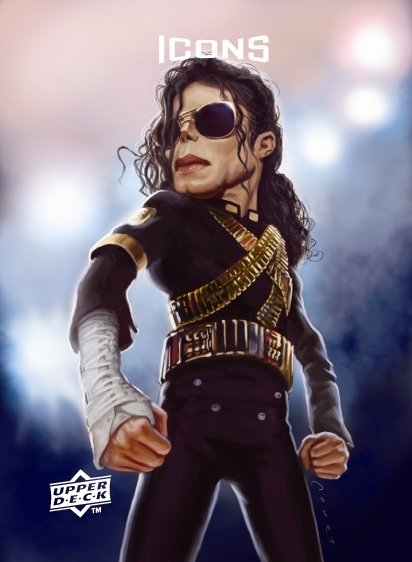 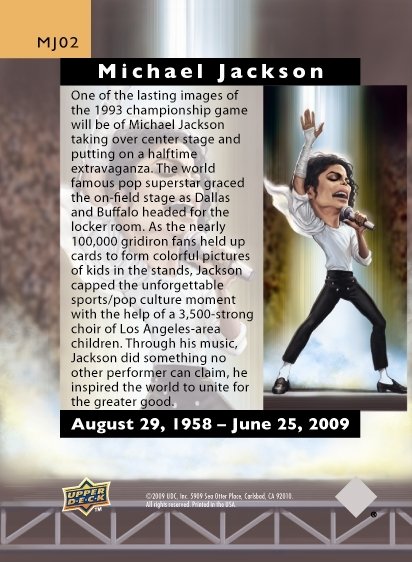 Carlsbad, CA (July 15, 2009) – On June 25, 2009, the world was shocked to hear that Michael Jackson had suddenly passed away. In honor of one of the world’s most prolific performers, The Upper Deck Company is releasing a quartet of short-printed, illustrated insert cards honoring Michael Jackson’s legendary 1993 halftime performance at Football’s biggest game.

On Sunday, January 31, 1993, the sporting world tuned in to watch Dallas battle Buffalo for football’s biggest title game. Adding to the excitement of the annual event, the halftime show stirred up the kind of buzz that only one performer could ever generate: Michael Jackson took center stage and with a set that featured some of his most memorable hits and trademark dance moves, he rocked the house of 98,374. Dallas won the game, 52-17, and Jackson won over a new generation of fans with what many consider the most spectacular halftime show in history.

“Michael Jackson was a unique entertainer whose performances routinely exceeded expectations as he continually tested the boundaries with his music and dance,” said Jason Masherah, Upper Deck’s director of Sports Brands. “After witnessing the outpouring of love at his memorial, we knew the public would appreciate this commemorative collection to celebrate his larger-than-life persona. Both sport and music fans alike will no doubt reminisce about the memorable halftime performance.”

The cards will be available in the August 4th launch of the 2009 UDx Baseball series.

Some of us count our points in life by how many people get deeply blissed by our existence. Michael Jackson may be the all-time winner in that category. His music will live forever in more hearts than any other.

In less than one year, Tim Burton’s Alice in Wonderland will hit theaters. Today you get the first studio photograph of Johnny Depp as The Mad Hatter.

School’s Out for Summer!

That is a sweet page from Marvel UK featuring our beloved Shuma-Gorath.

This is the final Friday of the school year in Miami.

One more class, then Party On! 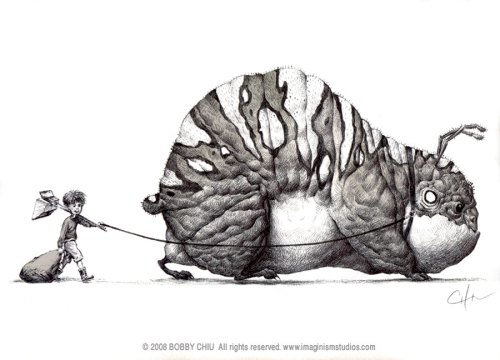 I do. I love my job. Teaching kids how to enjoy life with art? It doesn’t get any better than that. I am truly blessed.

So what did I do for the Wednesday Weekly Wonder Word? Same as always. I went to deviantart.com and searched for “I Love My Job”. That drawing was the best selection.