That was the first ever expansion set of Vs. System. Marvel Origins, released on April 1st, 2004. We were eventually blessed with 18 full sets by Upper Deck, and today I will pick my favorite card from each of the most recent thirteen. Cardboard bliss.

1. Marvel Evolution: X-Babies Attack. This is the final production set, and that card is the pinnacle of my influence on the game. I created a weenie burn deck and named it “X-Babies Attack!” back in the day. Upper Deck honored me with a matching plot twist, and thanks to alphabetical order it turned out to be the last expansion card ever printed.

2. Marvel Universe: Squirrel Girl. Doreen Green finishes a close second in the homage race. I lobbied, I pleaded, I threatened and I begged. Finally she appeared in the packs. Sigh.

3. DC Legends: Sea Creatures. I made my name by playing one-cost army characters, then they shocked me with this. Rare. Two resources to play. Pony!

4. Marvel Legends: Domino. I waited a long time for this lucky lass, and I used her in my original X-Babies deck for good luck. 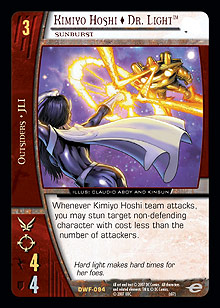 5. World’s Finest: Kim Hoshi. This expansion brought some serious bang to the table for DC, and none was brighter than Kimmy.

Marvel Team-up: Shuma-Gorath. The card did not see much play, but I can still hear the taunt from Capcom’s video game version… “Waste of FLESH!” 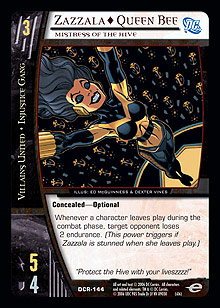 Infinite Crisis: Zazzala, Mistress of the Hive. There may not have ever been a better legacy card. She made War Paint possible.

Heralds of Galactus: Rogue, Total Transformation. If you never got to see this trick pulled off in real life, you missed something really special.

Legion of Superheroes: Supergirl, Lost in Time. Scariest. Painting. Ever.

Justice League of America: Infestation. My swarming weenies had nothing to compare. Such insane potential beats.

Avengers: Chaos Magic. They may have named this card after my subtitle on Realms, but prolly not. Then again, they did get my buddy Dave Devries to paint it. Hmmm.

Green Lantern Corps: Xallarap. You thought I would pick AGL, but no. This guy never existed in the comics. That’s right, he was created by a fan on a Green Lantern tribute site. It is one of the coolest trivia facts ever about Vs. System. And it ends our list.

Oh, the obscure. Last night I was watching Brave and the Bold on Cartoon Network. I saw Crazy Quilt. Really, I did.

This particular Art Villain is a quirky smirk on the collective mug of fanboy faces everywhere. We share a fascination until the fictional entity becomes a beacon that inquiring interwebs want to know. Crazy Quilt, from DC Comics. We have written about him here before on Full Body Transplant. Now he resurfaces on cable television. The Psi-Bank of mankind will be colored accordingly.

In honor of Crazy Quilt making the big-time, I present a special repeat perfomance of the plea for his card to be created. 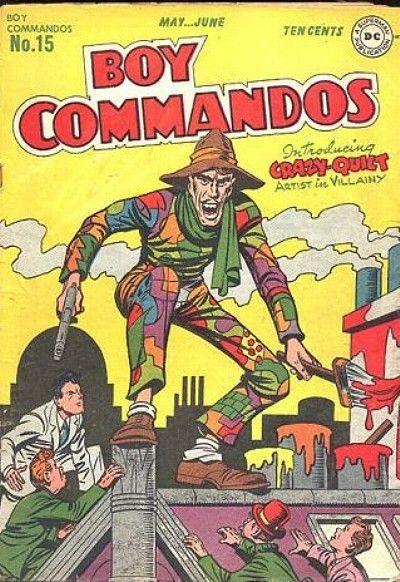 Life is a crazy quilt of connections. Letting go of everything allows one to stand of the verge of nothing and become a patchwork kaleidoscope of infinite possibility.

One possible villain who needs a Vs. System card? Crazy Quilt.

I wrote a bit about this mad artist on the mothership once upon a time.

Life went on for the Outsiders, but a single image in the final issue of my 30-book immersion distracted me from their mission. The last story contained a panel that flashed something even more vibrant than usual. Could my eyes be deceiving me, or did I just catch a glimpse of the Crazy Quilt?

Sixty years ago, Jack Kirby created one of the most colorful personalities in the entire comic book universe. Crazy Quilt was a successful artist and a master criminal. He left instructions for his henchmen by using coded imagery in his paintings. The strategy was just too cool, but it couldn’t last. During a botched robbery, a bullet to the eye blinded him, and then he got busted.

While in prison, Crazy Quilt volunteered for an experiment to restore his eyesight. A special helmet was fused to his optic nerves. It went haywire and caused him to see colors so bright that they drove him mad. He fought Batman, Robin, and the Boy Commandos throughout the ages, and then disappeared from continuity. In Outsiders #50, he is back . . . as a woman.

Gail Simone is the mastermind behind the reemergence of Crazy Quilt, and she has not yet revealed the secrets of his modern transformation. Whatever’s going on, it is extremely intense to look at.

Now, a year after I wrote that, I stumbled upon a very special description of Crazy Quilt on an art site.

Crazy Quilt is an obscure D.C comics villain who ran around in a patchwork patterned tunic and tights which he accesorized with a jaunty scarf. Crazy Quilt referred to himself as the “King of Color Crimes”and he could shoot light rays out of a special hat. Sadly, he didn’t last long.

What would Crazy Quilt’s cards look like? The possibilities are endless. One more time, quoting myself…

Life is a crazy quilt of connections. Letting go of everything allows one to stand of the verge of nothing and become a patchwork kaleidoscope of infinite possibility.

Look Inside Batman And What Do You See? Pony!

I am not making this up. It actually happened on Cartoon Network. During the latest episode of Brave and the Bold, Aquaman was miniaturized by Atom and entered Batman’s bloodstream.

The episode was called “Journey to the Center of the Bat”, and I was worried. Whatever would the King of the Seven Seas do without his Pony? How could he save the day sans Sea Creatures?

Well, it seems that human blood cells have the same sort of empathetic link with the coolest orange shirt of all time. Batman’s flowing hemoglobin clumped up and gave Aquaman a ride.

It was a beautiful thing.

And it makes me wonder. Could each of us improve our communication with our own blood cells until we reach the point at which we could command our own health? Aquaman gives us hope, now let’s get to work!

Filed under Comic Books, Vs. System

Tagged as Aquaman, batman, bloodstream, brave and the bold, Comic Books, dc comics, journey to the center of the bat, seahorse, Vs. System

Aquaman to be transplanted into Batman’s body.

On Cartoon Network’s Brave and the Bold this Friday night, Aquaman will be shrunk and inserted into Batman’s bloodstream to fight the poison. 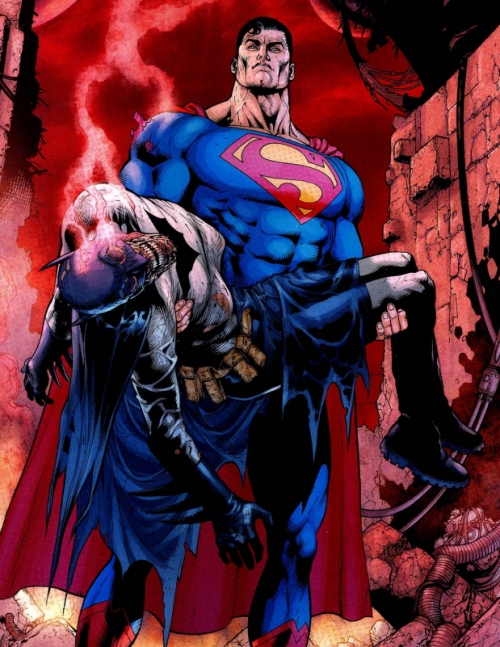 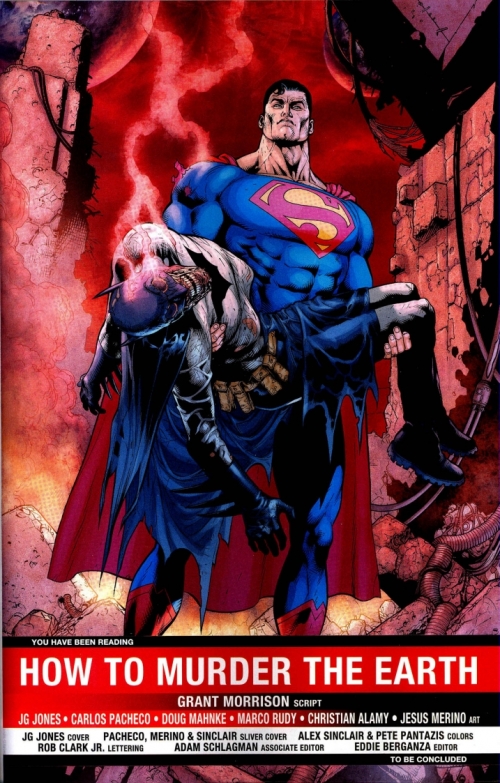 Yes, it is true. Grant Morrison, the confirmed Chaos Magician, has officially killed Batman with Omega Beams and the Anti-Life Equation.

Filed under Comic Books, Vs. System 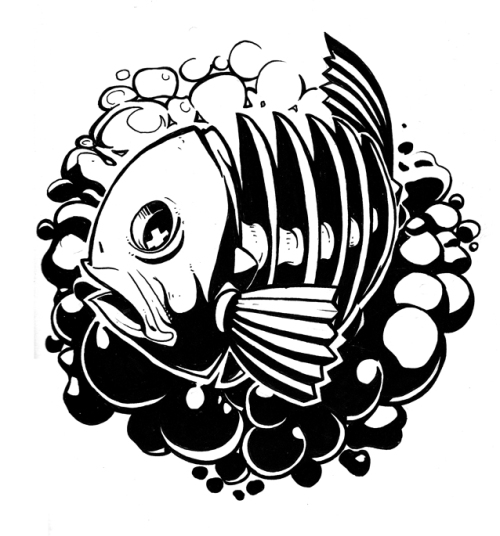 Every Friday I will feature another amazing artist’s gallery from http://www.deviantart.com. Today we get to groove on Lysol Jones. Feast your eyes. 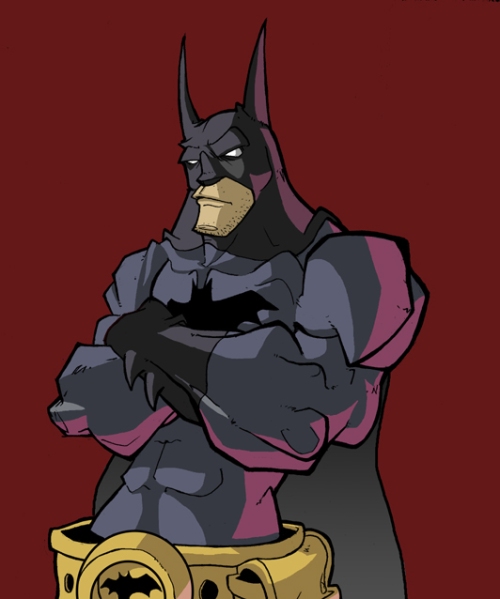 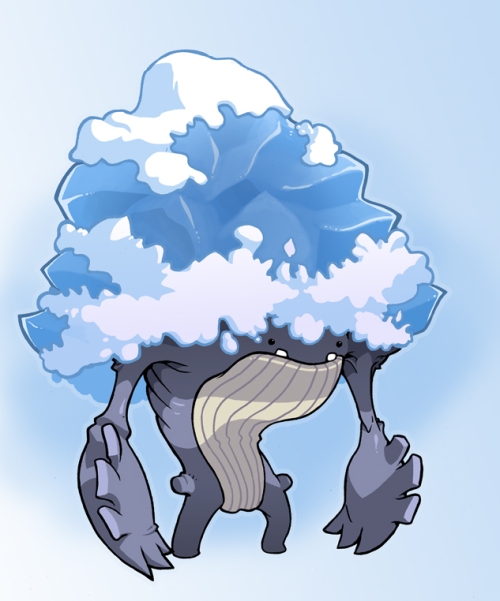