If I have said it once, I have said it a thousand times. Promethea is the best comic book ever made. Alan Moore, JH Williams III, Mick Gray, Jeremy Cox, and Todd Klein created a transcendant testament that tickles while it teaches. There is, perhaps, no greater source for learning about magical and spiritual traditions while being totally entertained. If you have never read the 32 issue series, please do it as soon as you can.

Our personal connection to Promethea is pretty intense. We jumped in at issue 12 and it became the only book we ever wrote letters for. Yes, the early issues had a published letter section just like the glory days. The book was highly irregular when it came to schedule, and I will never forget the months it was late. Such delicious agony. Then the ecstasy.

The page above shows the moment that Sophie finally came face to face with God. Did she say just any old words? Of course not. She was Promethea. She was the invisible embrace of the collective imagination that joins us all. She said our prayer.

We have three children. They are magical adults now, but every night when I tucked them in we said a prayer. It goes like this.

Dear God, I love you.

Help me to be what you want me to be, and thank you for everything.

When I saw that Alan Moore had written the same words for Sophie to say when she finally got a chance to speak to The Universe, I was speechless.

There were many, many moments like that from 1999-2004 while the new issues were still flowing. Issue #32 was the end of the line, in keeping with the Kabbalistic tradition. Promethea, however, lives on.

Surfing the interwebs keeps everything going nowadays. Yesterday something jumped from its grave and pulled my eyes out of their sockets. I was toying with bing instead of the google, and their image search returned a synchronicitizer stronger than any other.

The best interview I ever found involving Promethea contained two pics that blew my mind, since the original art hangs on our wall. They were nestled comfortably alongside Mick Gray, the World’s Greatest Inker. We will start with the interview highlights, then I will explain the connection. 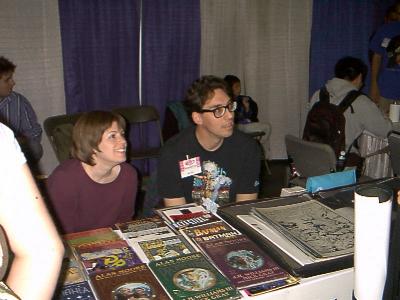 (Mick Gray and his wife Holly.)

Working on Promethea is much more challenging than any other job I have ever had. J.H. is always pushing me to the next level and it has been very rewarding. I am not looking forward to its end. It is just so inspiring to work on this book.

Alan Moore is well known for the notoriously long and detailed scripts that he provides for his illustrators that still give leeway for their input into the finished product. Do you get to read much of Alan’s scripts yourself or do you just concentrate on finishing the art that JH Williams provides for you?

I have a copy of the script for issue #1 and it is huge. But my job is to work close with J.H. to try and capture the vision. I have only talked to Alan once over the phone (After we won the Eisner award!) but J.H. talks with him quite often. There is a lot of communication between everybody who works on this book, this is why the quality is so high.

When Promethea finishes with Issue #32 you will have been working on it for about 5 years (1999-2004). Is this the longest you have worked on a single title?

Yes this is the longest run we both have on a book.

What are some of your favorite images from Promethea so far?

The “Mobius Strip” page from issue #15 (this is most definitively the most asked about page), the “Four Horseman of the Apocalypse” from issue #5 and the whole issue #12!

From an artists point of view what were some of the hardest images you have had to produce for Promethea. Which images do you think most closely approximated what you imagined they would turn out like?

The “Four Horseman” page was a lot of work, it just took a lot of time! And issue #12 was pretty tough because of the deal with all the pages put end to end make one long piece of art. That took extra time in making sure all the pages butted up to each other just right. Wow, that was some issue.

Do you have a favorite character that you enjoy producing an image of more than any of the others?

I have a soft spot for the original costume of Sophie’s. I miss it! Even thought it took longer to pencil and ink, it was just so cool.

Both Alan and JH Williams have said in interviews that while they were working on the Daath Issue “The Stars are But Thistles (#20) they were taken quite ill as if someone or something didn’t want them to be doing it. Did you have a similar experience yourself when you worked on it and have you received any interesting feedback from readers about this particular issue?

Hmmm… I had a really bad hemorrhoid during that issue… just kidding. I have never heard about this from Alan or J.H., sorry.

Has working on Promethea spurred any interest in finding out more about Magick, The Kabbalah, Aleister Crowley, Austin Osman Spare, John Dee or any other figures of real people who have appeared in Promethea?

Issue #26 which just came out looks and feels almost like a Tom Strong comic rather than the usual Promethea one (if there is such a thing as a usual Promethea Issue). Did you enjoy your change of style on this one. Are there any other comic such as Ghostworld which inspired this style?

I just love all the different styles J.H. has used on Promethea. It just makes it so much fun when you don’t know what is coming next.

How many awards have you won for your work on Promethea. Was the Eisner a single statue that you had to share with JHW or did you each get a statue?

We have been nominated many times (including this year!) for different awards but the only one we have actually won is for “Best Single Issue” for Promethea # 10 in 2001. We each got a nice plaque for our walls!

Is there a question about your work on Promethea that no one has ever asked you but you wish they would so you could answer it?

If you could work on any book, with any team, and do it forever, what would it be? Promethea.

Endless love to eroomnala for that magnificent interview. Now the freaky part. Mick Gray supplied a before-and-after set of drawings to illustrate the state of the page when it was given to him by JH Williams III. It just so happened to be the exact page we own, thanks to ebay. Spooky conicidence? Divine intervention? Either way, what bliss.

That is the drawing from JH Williams III. Promethea #7, pages 6-7. 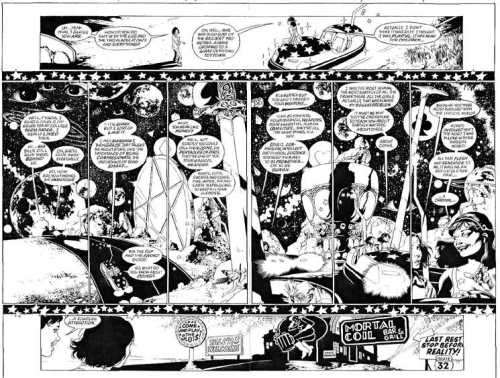 That is the finished inking by Mick Gray. The planets and eyes are actually collaged onto the ink surface.

That is a photograph of the pages, hanging in our bedroom .

So, you see, Promethea lives! Synchronicity is her standard time zone, and she set the alarm for this very moment. Thank you Alan Moore. Thank you JH Williams III. Thank you Mick Gray. Thank you Todd Klein. Thank you everyone at DC who allowed something this real to be published.

We will glow in gratitude forever.